The Bison at Ayer Pond on Orcas Island is archaeological.

One of the challenges in archaeology is to take a familiar landscape and, by considering the known data from the paleo sciences, make it strange and unfamiliar and ripe with possibilities for strange and unfamiliar archaeology.  Right here in the southern Salish Sea there is an excellent example of this coming to light.  As the ice retreated at the end of the last glacial period, the Salish Sea saw dramatic changes in sea level (both higher, and lower), in vegetation (tundra, grassland, and forest) and in the animals present on that dynamic landscape. 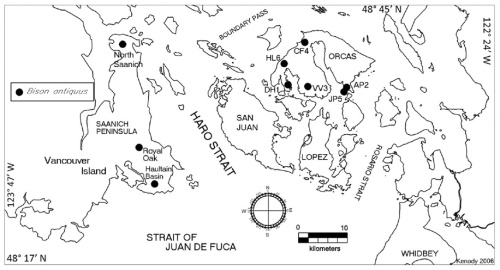 For years now, we have known that one of the large land mammal species of the Salish Sea around 14,000 years ago was bison — and not just any bison, but Bison antiquus, the extinct giant bison.  A number of remains of this creature have been found, mostly on the Saanich Peninsula and on Orcas Island,  which is one of the largest islands in the Salish Sea, sitting just south of Saturna Island, close to the Canadian Border.  Since these remains mostly clocked in at around 13,000 to 14,000 years ago, most archaeologists were interested in them primarily for their coolness factor and not because they seriously thought there might be relevance to early human presence here – these bison pre-date the Clovis Culture which was the consensual evidence for the first peopling of the Americas.  I have previously posted on this with reference to Clovis in Puget Sound, to the controversial Manis Mastodon site, as well as to the nearby Wenas Mammoth and even the Paisley Cave finds in Oregon – evidence is coming together for both a Clovis and a pre-Clovis occupation of the Salish Sea and environs.

Now with a new paper by Kenady et al. in press, these numerous bison finds take on a new importance: one of them is most likely archaeological.

This paper, which has been peer-reviewed and accepted for publication in the respected journal Quaternary International, demonstrates one of these Bison antiquus,  from Ayer Pond on Orcas Island is an archaeological site (the paper, reference below, is only available through academic library subscription).  The authors,  Stephan Kenady, Michael Wilson, Randall Schalk and Robert Mierendorf, make a careful and comprehensive inventory of the removals and alterations to the bones of this extinct creature and reach a compelling conclusion that the bison was butchered by humans and the high-value meat elements were removed. The bison has two radiocarbon dates, one of 11,7760 and one of 11,990 years ago, which calibrate to around 13,900 calendar years ago.   The 11,990 date was run at the laboratory at Irvine (UCIAMS), a premiere lab, and uses the most advanced treatments for bone, and has an error estimate of only +/- 25 years.  There seems little room for argument that the bison lived about 800 years before Clovis times.

Location of Ayer Pond relative to other ancient sites in Salish Sea.

Now, where the story gets a little unusual is in the story of the discovery.  In 2003, some workmen were digging a trench with a backhoe at this pond (which is a partially artficial pond created from wetlands) when they noticed these large bones.  Backhoe operators are often keen observers of what comes out of the ground!  Remarkably, the operators and drivers stopped work and excavated the site by hand, without tools, finding and collecting 98 bone elements and fragments, including some very small and delicate ones.  With the property owners not present, the workers were unsure of what to do, so they stored the bones in a cardboard box, uncleaned and untouched for several years until they came to the attention of scientists.  The exception is the skull, which was cleaned and displayed in one of the workers house.

So – the actual excavation of the site was not done by archaeologists, which is sub-optimal.  In this case though, it is not fatal to the site interpretation, both because of the careful recovery,  and because the uncleaned bones had considerable soil, peat, and other sediments adhering which established their stratigraphic context inc comparison to the pond’s stratigraphy.  And while it would have been strongly preferable to document the process of recovery of these bones, the fact is the bones themselves tell the story as much as their relative position or possible associations would have.  While some bones may have been missed, subsequent investigation by archaeologists of the backdirt and area did not find any other bones.  It seems the workers did a thorough and efficient job working with their bare hands.

Bone preservation is excellent and the surfaces of the bone are not eroded or pitted or otherwise obscured.  As the authors explain,  the parts of the skeleton present are limited to the cranium and to the lower ends of the limbs, with only one or two minor exceptions such as a single vertebrae.  This pattern is most consistent with human butchery.

None of the bones show evidence of gnawing or other carnivore agency.  In contrast, 34 of the bones or fragments show a total of 61 modifications that are not consistent with carnivore activity, such as spiral fracture, cleaver and chopper marks, and conical percussion fractures.  Some of the cleaving marks extend on multiple bones across joints, suggesting the modification happened with intent on an articulated, probably freshly dead, carcass.  These are typical of the use of stone tools to butcher an animal, and the authors are careful to tie the patterns observed to similar bison butchery sites from more recent times on the Plains and beyond.  In so doing, they situate their research within the bounds of consensual intepretation of butchery patterns for the Clovis and “paleoindian period”, meaning that objection to their analysis may well enforce objection to a vast back-catalogue of early archaeology.  That back-catalogue, being  based on both ancient and more recent sites, and conducted by leading proponents of a “Clovis First” model, is not controversial. 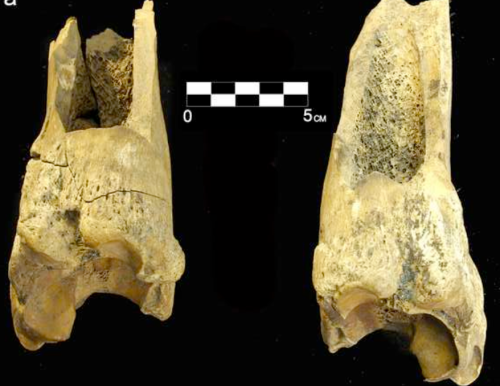 For example, the above picture shows the left and right distal tibia (the lower end of the hind lower leg bone) of the Ayer Pond bison.  Note that these two bones have been broken open in identical ways using percussion, resulting in spiral fracture, and show no signs of carnivore activity.  This seems to me to be extremely difficult to attribute to natural agencies.

As importantly as showing the bones at Ayer Pond are consistent with human agency, the authors show they are inconsistent with natural agencies like carnovores or trampling.  It must be remembered that the alternative to human agency is not a structureless and ambiguous bone assemblage.  Rather, the alternative is a highly, yet differently, structured assemblage bearing the characteristic hallmarks of natural agents such as wolves or even the giant short-faced bear, a mega-scavenger known to be in the area at this time.  Since the bones show many signs consistent with human predation and essentially lack any signs consistent with scavenging by animals, both tails of the data spread, positive and negative, need to be considered.  There is no other plausible explanation for the appearance and distribution of these bones.  The likely scenario is a kill and butchery on the frozen surface of paleo-Ayer Pond, followed by rapid sinking of the unwanted portions of the carcass into the wetland, and hence preservation free from scavenging.

So it is a remarkable find and a careful analysis which seems to me to be quite conclusive, despite the unusual recovery process.  Humans were therefore in the Salish Sea by 14,000 years ago and the fact we have not yet found abundant evidence of this is probably mostly due to having looked in the wrong places: a failure of imagination to think of our familiar region at times of different sea levels (see below), as a tundra, as a grassland teeming with giant bison.

43 responses to “The Bison at Ayer Pond on Orcas Island is archaeological.”