1778 Watercolour by John Webber of the interior of a house in Nootka Sound. Source: State Library of New South Wales. Click for original.

A few days ago I posted a beautiful watercolour of Nootka Sound by John Webber, artist on Cook’s third voyage.  In the ensuing discussion, it was brought up how nice it would be to see the original watercolours of more of his paintings, which often formed the basis for the  numerous engraved reproductions which are what one normally sees.  The loss of information in moving from the original to the engraving is something of an unknown quantity, and I for one had never seen the watercolours.  Until yesterday! 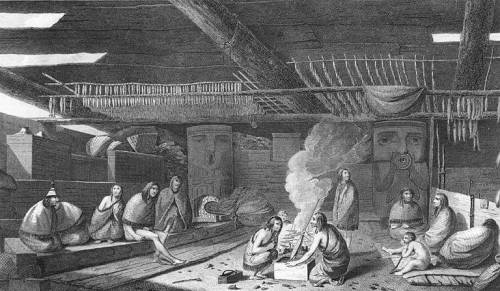 I’ll focus on the watercolour of the  (probable) Yuquot house interior today, and tomorrow look at the exterior view of this village in Nootka Sound.  By looking at the original compared to the engraved version (above), which I found at the State Library of New South Wales, several things jump out at me.

The hearth area is  instructive.  You can clearly see whole fish, probably herring,  being cooked over the fire,  impaled through the middle.  Most interesting, the activity in the foreground is clearly shown as being the manipulation of hot rocks into a bentwood box, using large wooden tongs.  The red staining on the face of some individuals is also quite intriguing: most likely this is a simple rendering of the face-painting which is well recorded for the northern coast and the interior by Franz Boas – and, as we will see, by Webber himself in his detailed portraits of these people.   The rendering of the whale fin effigy clearly shows its affinity to the one found at Ozette (below)  yet whereas the Ozette one had a Thunderbird design done in sea otter teeth, the Webber one shows a simpler geometric design, but also apparently done with teeth and some sort of banding, which also appears to be slightly raised.  There is a notable tolerance for larger things on the floor, household archaeologists take note! And in the back left, that appears to be a mega-basket filled with firewood?  A similar object is seen in the very upper left of the original,  and two paddles roughly tossed in behind the sleeping platform 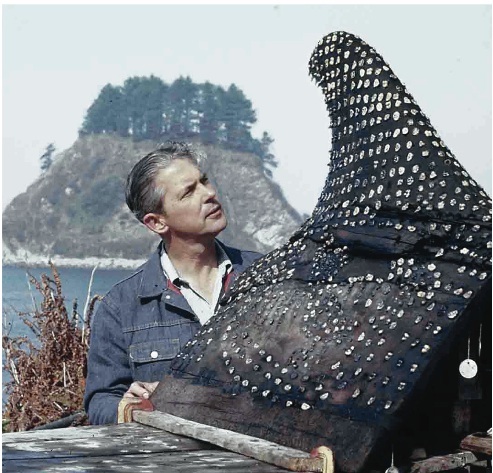 From all the black and white engravings I have seen, I never realized the carved house posts were painted, but the watercolour clearly shows red accenting (below).  More mundanely, you can see that some of the fish hanging from the rafters are not fillets but entire fish hanging tail-down.  In the far left of the original, as are some more whole fish, with deeply forked tails.  I’d also like to know what the gourd-like objects are hanging from the poles to the right.

Overall, the painting offers some very revealing  insight into the material culture of Nuu-chah-nulth people at the time of European contact, over and above what the derivative engravings of the painting show.  Tomorrow I will post on Webber’s exterior view of the houses, and in due course on the portrait paintings he made.  I look forward to comments from the highly knowledgeable readers of this blog!