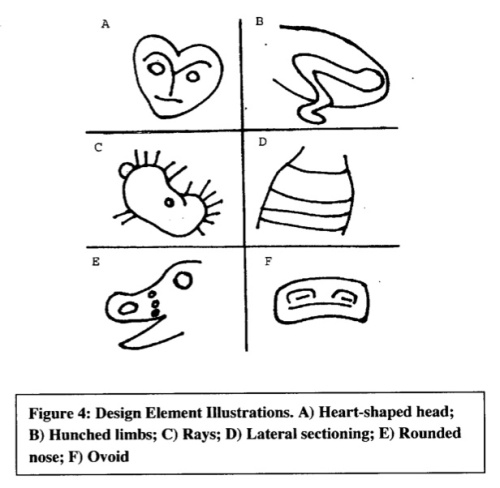 One recent M.A. thesis I was really looking forward to reading is by Amanda Adams entitled Visions cast on stone : a stylistic analysis of the petroglyphs of Gabriola Island, B.C., from UBC Anthropology 2003, and available for free download here.

I was particularly interested to read the instructions she received on proper deportment when visiting the rock art:

Sites were visited in a manner and with a personal code of conduct adhering to Snuneymuxw wishes. Petroglyph sites were not visited at either dawn or dusk. A respectful demeanor was expected as was an “open heart and mind” (Bill Seward, Snuneymuxw elder, personal communication 2002). I was asked to give my full attention to the petroglyphs and their sacredness, not allowing daily distractions to interfere with my concentration on the ancient imagery. These expectations were met to the best of my ability. (18-19)

While many archaeologists are under the impression that there is little to no ethnographic information about petroglyphs, I have long felt that more likely such knowledge is private or highly privileged and not readily shareable.  In this self-serving sense, it was gratifying to see that Adams was able to record some such information:

Snuneymuxw Elder, Bill Seward, asserts that many petroglyphs were made by shamans, hunters and vision seekers (personal communication 2002) while Elder Ellen White maintains that the carvings were places where people both sought and gained power. She explained that “men would be stripped – even in cold weather and laid on top of each petroglyph – learning the spirit world, connecting to the area.” She also noted that the pitted ‘dots’ surrounding several of the carvings were “points of access”, places where one could dip their fingers into pools of “energy” and reservoirs of strength (Archaeology Forum group tour 2002).  (p 13)

Another welcome aspect of Adams’ thesis is her direct comparison to portable art.  While she largely limits herself to the closest sites, such as False Narrows, she at least tries to situate the rock art in relation to the culture-historical sequence in the Gulf of Georgia.  The conventional wisdom on the rock art has always been that it was from the Marpole period, which is when everything exciting allegedly happened in the Gulf, and it is not surprising that Adams reinforces this.  I do question, however, the strength of the association she draws – a lot of Marpole art is really nothing like these petroglyphs.  I also am uncertain about her  audacious suggestion that all of the Gabriola art may have been made in a single generation, or at least a very short period of time, by a single person or a small group of specialists.  For one thing, I would bet we know of less than 10% of the actual rock art on that island.  For another, stylistic cross-dating with this much specificity brings us closer to connoisseurship than to archaeology, and while it can be done and is legitimate, it requires very intense close, even “thick”, description to be compelling.

She also pegs Marpole as being from 2400 to 1000 (14C)  years ago.  I would very much like to see on what basis Marpole can be so defined.  Classic Marpole, as defined by the Beach Grove and Garrison sub-phases, stretches from perhaps 2100 to 1500 years ago — almost one thousand years less.  And, being almost on Vancouver Island where Marpole is regionally expressed less clearly, the Gabriola case must be made even tighter.

I suppose I have a generic objection to the notion that Marpole is a cultural flourescence that then gets expanded to include all the “complex” behaviour seen in the local archaeological record.  Burial cairns, for example, once seen as Marpole type-fossils, are likely both older and more recent than Marpole itself.  We will never understand Marpole if we just use it as a flexible container into which we pour evidence for “complex” behaviour.

Now, all that is a bit unfair to Adams’ thesis, which does not mainly seek to refine our understanding of Marpole.  Yet, as I have mentioned before, M.A. theses are a real backbone of the discipline of archaeology in British Columbia.  About a decade ago or a little more, UBC Anthropology instituted a 50 page limit on their theses, which made me quite apprehensive about whether the UBC MA thesis would continue to be a contribution to knowledge vs. an extended term paper.  I don’t want to pick on Adams’ thesis in this regard, but I suspect she badly needed at least another 50 pages to make her arguments more compelling.  I note she makes extensive use of the substantial 1990 M.A. thesis by Margaret Holm on pre-contact aboriginal art styles – indeed that former M.A. is a necessary precondition, a building-block, for this one. Holm herself relies heavily on Doris Lundy’s excellent 1974 rock art thesis.  Will Adams’  play a similar role in the future?  Time will tell.

I understand where the impetus at UBC to shrink the requirements for their M.A. program came from, and there have been some good theses produced under the new rules. Longer doesn’t equal better of course, but it is much harder and requires more supervision to write something short and good than to write something  long and good.  I don’t believe students or the discipline are particularly well served by an artificial page limit.

In the end, while I remain unconvinced by Adams’ arguments, I do welcome her call for more focused, local study of the rock art of British Columbia.  Regular readers will know I object to the crass treatment of rock art, whether that be in Vancouver or on Gabriola Island itself, and certainly one thing we can take away from this thesis is a heightened sense of the past and continuing spiritual values of these important elements of the national heritage. 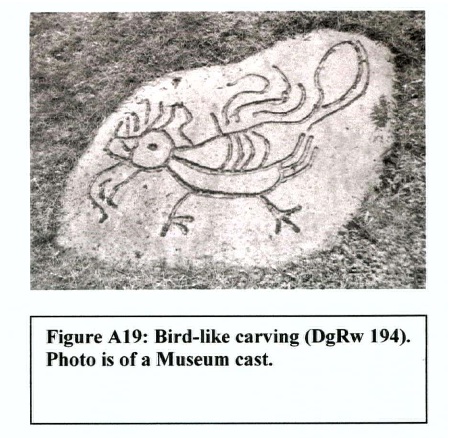 I would have welcomed a complete catalogue of original renderings of the petroglyphs of Gabriola Island.